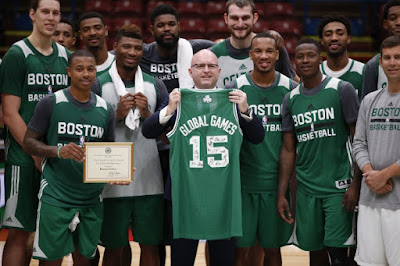 The Celtics were surprisingly productive last season, and after upgrading in the offseason, they are ready to turn heads once again.  Evan Turner, Avery Bradley, David Lee, and other Celtics players have not been shy in talking about the team’s remarkable depth at every position.  This team expects to be playoff-bound for the second straight year, and for the first time since 2010, the roster features fifteen legitimate players – all non-busts – who are ready to compete.

Yes, the Celtics still lack a star scorer (let alone three like the 2008 Championship team) but Danny Ainge has fashioned an undeniably impressive foundation of young hard-working players.  R.J. Hunter may eventually grow into a bigtime scoring role, but in the meantime, the Celtics will operate with fifteen different guys (arguably sixteen if you count James Young) with unique skillsets and excellent work ethic.  They have fifteen different players that could potentially be starters in the NBA if they were not all crammed together on one roster.  Ainge has quietly transformed the Celtics into the deepest team in the East.

Check out the box score from their preseason exhibition win against Olimpia Milano.  Every single Celtics player contributed.  Turner, who led the team with three triple-doubles last season, was out due to a knee injury.  Fourteen of the remaining fifteen players scored points. (way to go James Young – perhaps you would have gotten on the board too if you were more concerned with consistency on the basketball court rather than consistency on the dance floor.)

The roster can be broken down into three logical rotations.

*SG James Young is not listed on these rotations because he’s clearly still not ready for meaningful minutes.

Defeating Milan is obviously no big deal.  However it is extremely encouraging to see that all fifteen Boston players who touched the court in their first preseason game registered positive plus/minus ratings.  In other words, the team played well from start to finish, regardless of which combination of players was on the court. 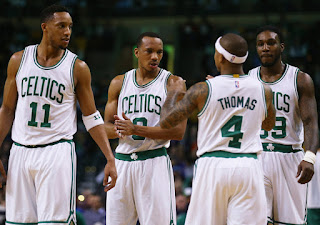 Ainge promised each and every one of these players an opportunity to contribute for the Celtics and they all bought in, working hard under Brad Stevens to silence the doubters and surge to a playoff spot in the second half of the season.  This roster is full of hard-working talented players and that is no accident.

These like-minded individuals often form a brotherhood during these kinds of trips and a passionate culture becomes infectious.  The 2008 championship squad traveled to Italy in the preseason and bred a powerful winning culture known as “Ubuntu” to unite the team, while priding themselves on hard work, defense, and faith in a coach that identifies with and speaks to the players. Sound familiar?

This team may not yet have the star power to win a championship, but they have everything else they need to become a top-four team in the East.  With a team-wide focus on defense and three productive players at every position, this team is incredibly well-equipped to handle the grind of a long NBA season.  Better yet essentially every player is capable of playing multiple positions, so the possible lineup combinations that Brad Stevens will dabble with are endless. These Celtics are multidimensional with an ability to play big or small.  They will often look to outrun opponents – but they can also work the middle with newly acquired veteran big men, Lee and Amir Johnson.

There is a plethora of three point shooting ability that will help their offense regardless of whether they play fast-paced or decide to slow it down.  Working the ball inside and using Lee to establish a an inside-outside presence was very effective during their preseason games in Europe.
Something interesting to watch out for – Lee and Bradley have formed an unlikely scoring duo in the starting unit.  The two of them have combined for 57 points in two preseason games.  Isaiah Thomas obviously continues to be the offensive lightning rod as their sixth man, but Lee’s veteran leadership seems to be rubbing off on Bradley, who at 24 years old is the longest tenured Celtic.

I wrote about Hunter’s bright future in Boston and mentioned that Bradley’s inconsistent jump shot is one of the reasons that Hunter will have the opportunity to shine as a sharpshooting volume scorer.  However Lee’s presence, as well as the battle for playing time, has seemingly motivated Bradley to “fix” his jump shot.  Thus far in the preseason he is 7-8 from three-point range while playing his usual tenacious defense, and while his long range buckets came mostly on wide-open looks, it does appear that Bradley has removed a hitch from his jump shot that hurt him last season.

Many of Bradley's three-pointers were also assisted by Lee, who was scoring effectively and frequently drawing double-teams in the paint.  The veteran leadership that Lee is demonstrating is very valuable to a team with so many young players.  Coming off a championship season with the Warriors, Lee knows what it takes to be successful and has frequently drawn comparisons between the Celtics and the Warriors.  Bradley seems to love having him on the court and in addition to helping him because more effective as a player, hopefully Lee teaches the young veteran a thing or two about being a leader as well. 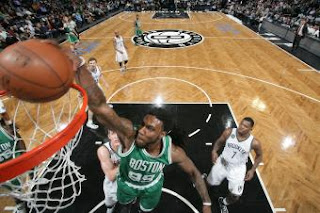 The Celtics get their first taste of NBA action tonight in Brooklyn against the Nets.

Don’t be surprised if the Celtics are out there running way too hard for a preseason game.  It’s not like they have to worry about fresh legs.