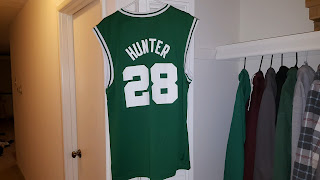 This is my R.J. Hunter jersey, ordered online three months ago on the night of the NBA draft.  I was one of the first people on the planet to own this jersey and I’ll be proud to say so as the stands at the TD Garden gradually overflow with them over the next several seasons.

In many ways, Hunter may be the perfect fit, the missing cog, and the future star of a rebuilding Celtics’ franchise.  Is that too much praise for a 21 year old rookie swingman that might start his first NBA season in the D-League?  Perhaps.  But if you are a Celtics' fan, then there are a lot of reasons to have a lot of faith in R.J.

The Celtics have lacked a prolific scorer, or even a reliable volume scorer, since trading Paul Pierce to Brooklyn two seasons ago.  It is no coincidence that Danny Ainge targeted Hunter with the 28th overall pick, selecting a player whose biggest asset is scoring ability rather than athleticism or "NBA-readiness."

Analysts such as ESPN’s Jay Bilas claim that Hunter’s “range is as soon as he gets in the building,” a statement that was backed up by Hunter’s performance in three record-breaking seasons at Georgia State as well as a solid performance in the NBA Summer League.  It doesn't take a basketball guru to recognize that Hunter is already the best pure shooter on the team.

Hunter’s unconventional jump shot is comparable to Stephen Curry’s because they share a quick release, inestimable range, and deep accuracy in off-balance and tight coverage situations.  Listed at 6’6’’ with a freakish 6’11’’ wingspan, Hunter is incredibly difficult to contest when he pulls up to shoot. 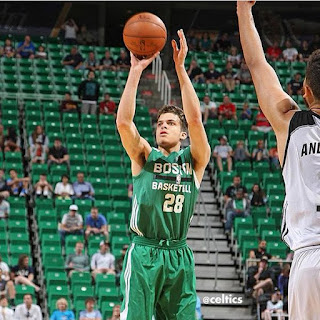 He is also already showing improvement as a playmaker and drives effectively to the hoop against smaller defenders, often drawing contact to get to the free throw line where he shoots almost 90%.   As Georgia State’s all-time leader in career points, 3-pointers, and free throws, Hunter raised his scoring average from 17 points per game as a freshman to 19.7 as a junior.

Hunter grew up in Indiana just like another former Celtics' great, and after he was selected by Boston, Hunter said "Hopefully I'll be their best shooter since Larry Legend."  While neither sharpshooter was the most athletic player in their respective draft classes, they were both dominant college scorers for lesser known schools.

Hunter shoots accurately off the dribble and needs only an inch or two of separation from his defender to find his shot.  His leaning mid-range jumper was one of his biggest weapons in college.  Deadly from long range and accurate from seemingly any location and any angle, Hunter has one of the highest ceilings of any guard in his draft class.  Two or three seasons under Brad Stevens may transform Hunter into a premiere NBA scoring threat.

These Stevens-Celtics are now far-removed from the Celtics of the Doc Rivers era.  This team is young, exciting, and gritty.  They no longer rely on veteran leadership or complex offensive plays because admittedly without a big-name free agent signing they are still a couple seasons away from meaningful playoff games.  Nevertheless this is a fascinating Celtics' team unlike any that we've seen before.

After trading away Rajon Rondo last season, the role players that were left behind comprised a scrappy young core that prides itself on physicality, hustle, and resilience.  They lacked talent, but they were well-coached, eager to play, and eager to improve; that's all it takes to make the playoffs in the Eastern Conference.

Check out this picture that Adam Himmeslbach tweeted to visually grasp exactly how many draft picks the Celtics have over the next six seasons.  Regardless of whether they use all these picks, or trade away most of them away for an elite veteran who can help Stevens mentor Hunter and the other young Celtics, expect Hunter to be a major contributor when the Celtics find their way back into important playoff games.

The Celtics need a captain.  They need a Paul Pierce.  The Truth left some gigantic shoes to fill, but fortunately, Hunter does not need to take the entire franchise upon his back for a decade like Pierce did.  He only needs to shoot the lights out.  Hunter will quickly win over Celtics' fans with his gritty play, superior work ethic, and unconscious scoring ability from the guard position.  He will quickly move ahead of James Young on the depth chart if he hasn't already.

While I love Avery Bradley, one of the best on-ball defenders in the NBA, the Celtics cannot afford to continue relying on his felonious jump shot as a source of offense.  Bradley knocked down just 5 of 19 three-pointers when Cleveland swept them in the first round of the playoffs.  Many of those fourteen misses were wide-open looks and many of those wide-open looks were air-balls.

Enter: R.J. Hunter, with a skillset built for Stevens’ system as a scrappy young player who works hard and scores in bunches.

It is no coincidence that Stevens tried to recruit Hunter out of high school to play for him at Butler three years ago.  R.J. opted to go play for his father, Ron Hunter, at Georgia State instead.  Three years later, Hunter has emerged as an even better sharpshooter with intangible leadership skills and an incredibly high basketball IQ.  In summer league play, Hunter showed off his playmaking ability and situational awareness with stellar plays on defense and improved ball handling.  Hunter showed off an ability to effectively drive the lane while dishing out some nifty passes to open teammates, frequently connecting with fellow rookie Jordan Mickey for beautiful alley-oop assists. 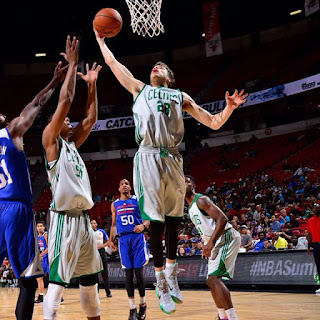 Hunter will eventually become a primary scoring option, but in the meantime, he has already improved in other aspects and has demonstrated that he can positively impact games in many ways.  Even his fellow rookies have noticed the impact he can make, voting for Hunter in a rookie survey as the second biggest steal in the draft and the second best shooter in the draft.


Hunter does not need a D-League stint to continue his development.  He works hard and he loves to win.  His ESPY-nominated performance leading Georgia State over Baylor was arguably the biggest upset of last year's NCAA Tournament.

Facing a twelve point deficit in the final minutes of the game, Hunter scored 12 of his team’s final 13 points, including this DEEP game-winning three pointer with two seconds left on the clock.  Hunter may not be the most athletic or physically gifted player, but this kid is the real deal.

By halfway through this coming season, Hunter will likely have carved out some consistent minutes for himself, and over time he will grow to become a reliable NBA scorer.  Even as a scrawny rookie, Hunter could become a very effective scorer in the second unit.  At some point, Stevens will likely dabble with a small three-guard lineup that features Hunter, Thomas, and Boston's other first round pick Terry Rozier.  It would be extremely difficult for opposing benches to keep up with them.

With basketball smarts, grit, and a remarkable jumper, I have no doubt that this kid was born to be a Celtic.  Hunter will become a centerpiece for this franchise as they seek to establish a new identity with a talented young leader.  I cannot wait to see who will play alongside him in the future.

The rebuilding stages are tough but they are going well.  With Hunter's help, this team will soon develop into a truly competitive force in the East.  Is this too much to expect from a 21 year old rookie swingman that might start his first NBA season in the D-League?  No - not if you like Boston basketball.  Not if you believe in R.J.  Now go get yourself a #28 jersey.
Posted by Jon Jacobson at 2:50 PM