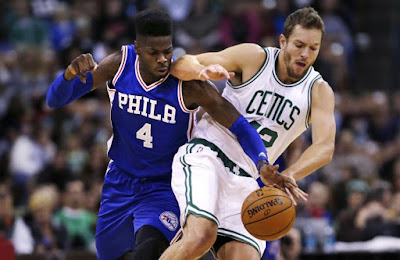 The wait is over and basketball season is back.  The Celtics finished their preseason with a promising 6-1 record and tonight they seek to carry that momentum into the regular season.  The game takes place at 7:30 pm in Boston against the lowly 76ers, whom the Celtics defeated 81-65 in their final preseason game last week.

The Sixers severely lack depth and scoring ability.  They plan to rebuild around their talented new rookie center, Jahlil Okafor, but overall they are currently one of the worst teams in the NBA.  The Celtics have the depth and talent to become one of the top teams in the East, so expect an easy victory tonight.  Here are some important things to watch for in the season opener: 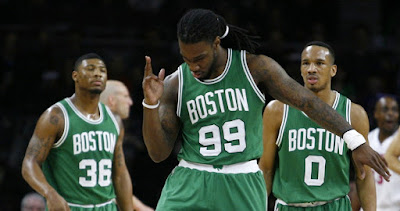 Brad Stevens dabbled with several different starting lineups throughout the preseason, but this one was most prevalent.  Marcus Smart, Avery Bradley, and Jae Crowder have all stepped into leadership roles while David Lee is also a natural leader.  However Amir Johnson is much more capable on defense than Lee, making him one of several players who are banging on the door of the starting lineup.

Lee is a great addition … just not necessarily a great starting power forward.  He brings intangible assets such as veteran presence, leadership, and offensive versatility.  Unfortunately he is just not that effective on the court anymore.  He helped Golden State win a title last year but barely received any playing time during the postseason.

His offensive awareness helps the team run smoothly and he has developed a nice rapport with Bradley.  However Lee’s defense is unreliable and his scoring ability showed further regression during the preseason.  If Lee starts tonight, look for him to gradually relinquish that role to Johnson.

Lee and Zeller have played well, but not as well as Johnson and Kelly Olynyk have played off the bench.  The rotation may change frequently throughout the season.  Furthermore guards Isaiah Thomas and Evan Turner, two of the team's top playmakers, are part of the second unit right now.  They are fighting for starting roles as well.  Still, the biggest questions remain in the frontcourt, where six talented big men are fighting for four rotational spots.

2. Interior Presence – Somebody must step up 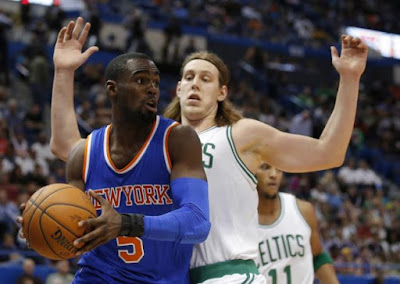 The frontcourt puzzle will play itself out.  The Celtics have plenty of talented big men and some will earn more minutes than others.  However one of the best ways for these guys to establish themselves in the rotation is to step up their interior defensive game.

The Celtics have spent the last five years getting outmuscled and outrebounded.  They need immediate improvement in paint presence so that they no longer look helpless against opponents who can score effectively inside.  Offensive rebounds have also been a major issue.

Smart, Bradley, Crowder, and Terry Rozier give the Celtics an elite defensive presence in their backcourt.  However, once opponents penetrate inside, the Celtics bigs often look overmatched against (what should be) inferior opponents.  Lee and Olynyk are the biggest culprits of getting beaten inside by inferior players.  Zeller is guilty too.

Look for Johnson to fight for minutes, as well as a starting role, by building upon his defensive prowess.  Johnson’s high level of activity on defense makes him very valuable.  He has an underrated quickness that enables him to impact the game in many ways.

This team does not need Johnson to be a big-time scorer.  He just needs to consistently work hard and use his size and athleticism to maximize his defensive impact.  Furthermore, Sullinger and Mickey are on the outskirts of the rotation, but they can still earn some minutes if they are able to help control the paint by grabbing boards and playing physical defense.  Sullinger got hot towards the end of the preseason, finally parking his gigantic body under the rim and proceeding to pull down 14 rebounds during their final preseason game.

3. Noel and Okafor – The Saviors of the Sixers? 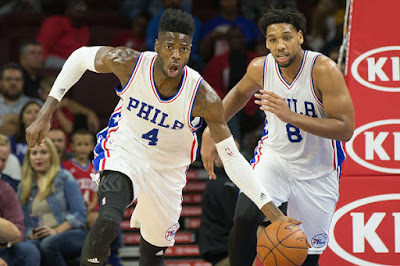 Sixers fans have been waiting for months to see their star big men in regular season action together for the first time.  Okafor and Nerlens Noel are both exceptionally skilled centers.  Okafor is a massive threat in the post while Noel is freakishly athletic.  The young and talented 6’11’’ centers combine for an intriguingly ferocious frontcourt in Philly.
Many believed that Okafor would be the #1 overall pick this past summer.  However the 19 year old, 270 lb freshman somehow slipped to Philadelphia at #3, right after leading Duke to a national championship.  Nevertheless the massive youngster has NBA-ready post moves and an NBA-ready body.  Essentially, he is teenage Al Jefferson with a 7'5'' wingspan.

Nearly half of this year's draft class believes that Okafor will win Rookie of the Year.  It's easy to see why, especially when you put him alongside a blossoming Noel, the #6 overall pick in the 2013 draft.  The exciting duo will give the Celtics a lot of trouble, but other than two big men, the Sixers don't have much else going for them.

Expect Okafor and Noel to combine for approximately 25 points and 20 rebounds tonight.  The rest of the game should belong to Boston.  Okafor will show off some nifty offensive plays in his NBA debut, working the post against Zeller and the Celtics.  Nevertheless the Sixers stand little chance of winning the game.


Prediction: Celtics win 94-81.  Look for Smart to dominate on both sides of the ball, Crowder to set the pace in the hustle department, and rookie point guard Terry Rozier to come up with some big plays in his first official NBA game.
Posted by Jon Jacobson at 1:22 PM