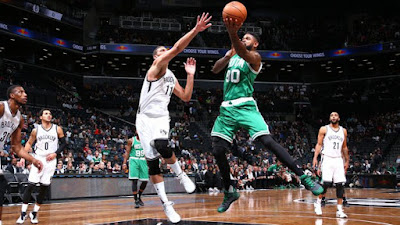 The Celtics showed off their depth and versatility last night with a commanding victory over the Brooklyn Nets.  Boston defeated Brooklyn 109-105 however the Celtics never trailed and they firmly controlled the game from start to finish.

Boston led by as much as 18 before inserting non-rotational players such as Corey Walden and James Young into the lineup for the entire fourth quarter.  Overall, the Celtics were undeniably impressive in their first taste of NBA preseason action.  Here are five key takeaways from last night’s victory. 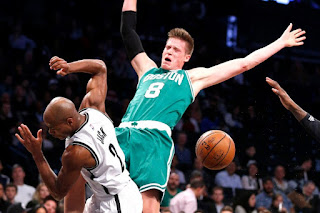 1. The Celtics defensive backcourt wreaks havoc.  As expected, the Celtics displayed high levels of energy and were incredibly active on defense.  They contested nearly every single opposing shot in the first half and frequently harassed opposing ball handlers with tight defensive pressure.  The Celtics recorded 12 steals and 9 blocks, frustrating Nets players and causing them to lose their cool and play errant basketball.  Brooklyn point guard Jarrett Jack was ejected in the second quarter for tackling Jonas Jerebko after Jack had turned the ball over to Jared Sullinger.

The Celtics use hustle, resilience, and tenacity to create chaos for opposing offenses.  It was very impressive that the Celtics could keep their defensive intensity level high even with three of their best on-ball defenders missing the game.  Marcus Smart, Avery Bradley, and Terry Rozier are combo guards that bring explosiveness and tenacity to their backcourt defense while often producing subsequent fast-break points.  The Celtics scored 18 fast break points last night and that number will only go up when those guards return from their respective ailments.

2. The Celtics defensive frontcourt still lacks paint presence.  This is an issue that has plagued the Celtics for five years.  While the Celtics can outrun almost any opponent and can produce offensively in a variety of ways, they still lack an interior defensive anchor.  The Nets played poorly last night but they still out-rebounded the Celtics while managing to score 50 points from inside the paint.  The Celtics big men need to do better.

Amir Johnson is a slight upgrade from last season in terms of defensive presence, but without a commanding force that truly deters opponents from frequently attacking the rim, Johnson and the other bigs must learn to work together more effectively.  It is worth noting that David Lee also did not play last night, however majority of Lee’s contributions will come through his offensive versatility and veteran leadership rather than his defense. 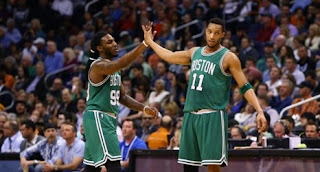 3. The Celtics have ridiculous depth.  Before the game, I wrote about the depth on the Celtics roster and that depth is what enabled them to dominate the Nets even when four important Celtics players were sidelined.

The Celtics theoretically have enough talent to field three NBA starting lineups, so opposing second units will always be overmatched against Boston's bench.  The Celtics backups exhibit zero drop-off in both production and intensity.

There is no rest for the weary against the Celtics, who attack their opponents with intensity and fresh legs by mixing in so many different hard-working defensive-oriented players into the lineup.  Many teams find themselves struggling to field a passable roster during the middle months of the long NBA season, but the Celtics have the talent to always be productive, regardless of what combination of players is on the court.

4. I’m going to keep saying it - R.J. Hunter may be the future face of this franchise.  Deep down, we can all see that this kid is special and there is no ceiling on his potential.  Hunter was stroking it from three-point range in the first half last night and then filled up the rest of his stat sheet in the second half.  He works hard and has the ability to score like crazy.  Obviously he’s just a rookie and can’t be trusted yet as a reliable volume scorer in the NBA, but that hasn’t stopped him from finding countless other ways to contribute.

His length and basketball IQ often help him intercept passes and he recorded a team-high 4 steals against the Nets.  He also contributed 11 points, 4 rebounds, and 4 assists in his first game against NBA opposition while showing no hesitation when pulling up from three-point range.  His jump shot will only become more lethal as he gradually becomes more comfortable in the NBA. 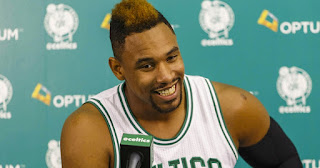 5. Sullinger looks very out of place.  He’s clearly uncomfortable about his uncertain role in the rotation and he honestly looks like he belongs on another team.  After all the offseason hype about Sullinger finally getting in shape, he predictably failed to do so.  Furthermore he shot 1-8 from the field last night, chucking up erroneous long range jumpers.  It is hard to watch Sullinger launch three-point attempts when everybody knows that he should be using his gigantic backside to post up defenders.

There was a time when Sullinger was one of the best young players on this team, but with a measly two rebounds, three points, and four fouls in 12 minutes of action yesterday, it is hard to envision him receiving meaningful playing time this year.  The offseason acquisitions of Johnson and Lee make Sullinger entirely expendable, but truthfully there are no teams right now that would be interested in trading for a young player that isn't showing any improvement either from a skills or a conditioning standpoint.

Sullinger will likely be relegated to a bench role, and that’s probably for the best if Stevens wants his team to be as fast, active, and aggressive as possible.  Sullinger could be a starter for many NBA teams but he is holding himself back from reaching his full potential.  He will only play significant minutes this season when Lee is resting or when another big man gets hurt.
Posted by Jon Jacobson at 12:59 PM