Boston lost Gordon Hayward to open the season, but that has not stopped Brad Stevens from leading the Celtics to one of their best starts in franchise history with stellar play from Al Horford, Jaylen Brown, Jayson Tatum, Marcus Smart, Terry Rozier, and MVP candidate Kyrie Irving.

With the Celtics and Cavaliers tipping off the NBA regular season tonight, after an unprecedentedly chaotic offseason that featured 15 All-Stars changing teams, it is time to break down predictions for the NBA’s end-of-season awards.

In his fourth year in the league, the 22-year-old Gordon is a prime breakout candidate. After playing three positions including center during the preseason, Gordon appears poised to lead the Magic in both points and rebounds this season. His preseason averages of 18.4 points and 7.4 rebounds in 23.9 minutes were considerably better than his 12.7 points and 5.1 rebounds over 28.7 minutes per game last season.

Gordon is demonstrating newfound confidence, improved physicality, and consistent aggression in the paint. He also appears to have improved his three-point shot, which he converted at a .429 rate this preseason compared to .288 last season.

Gordon accredits much of his development to mental training and meditation and he is exhibiting the potential and athleticism necessary to develop into a dynamic high-volume scorer. The Magic traded away Victor Oladipo to rebuild in the offseason and Gordon has a great opportunity to seize a big-time scoring role in Orlando.

Plenty of talented scorers have sixth man roles around the NBA, but very few of them can shut down the league's best players on defense.

Smart wears down opponents and inspires his teammates with relentless physical intensity, diving for loose balls and always doing the little things right.

Embracing his role as the sixth man, Smart takes pride in leading the second unit. He also lost 20 pounds in the offseason and has demonstrated tremendous improvement in his jump shot during the preseason.

With a vital role and heavy minutes off the bench in relief of youngsters Jaylen Brown and Jayson Tatum, Smart will play up to four different positions for the Celtics while facilitating energy as their "sixth starter."

Watching the lengthy 6’7’’ Leonard lock down opponents can be mesmerizing. As the best all-around player on the second-best team in the West, Leonard has become a perennial contender for both DPOY and MVP by causing nightmares for opposing scorers and coaches with elite toughness and defensive awareness.

Despite being expected to miss the Spurs’ regular-season opener because of a quad injury, Leonard should quickly return to wreaking havoc on defense.

Rookie of the Year: Ben Simmons

The #1 overall pick in the 2016 draft would have played his way into ROY consideration last year, but he suffered a season-ending foot injury prior to the start of the season.

Now healthy, the 6’10’’ Australian forward is expected to play a variety of positions for the 76ers, including the unique point forward role seen for stars like LeBron James, Draymond Green, Kevin Garnett, and Larry Bird. Simmons has astounding court vision and dribbling skills. If he stays healthy, he will develop into an elite magician in the interior amidst a league dominated by three-point shooting.

Coming off a career year in which the 6’10’’ forward averaged 28.0 points and 11.8 rebounds, the 24-year-old Davis has looked unstoppable in the preseason. Playing alongside DeMarcus Cousins in the bruising New Orleans frontcourt, Davis racked up 37 points and 15 rebounds during their third preseason game.

As a young superstar establishing individual dominance during the age of super-teams, Davis needs to stay healthy and continue building on the monumental production he exhibited last season when he produced the fourth-highest Player Efficiency Rating in the NBA (27.59) and the second-most points per game of those four players.

Russell Westbrook now shares the ball with Paul George and Carmelo Anthony and will no longer attempt 24 shots per game, while James and Kevin Durant sacrifice MVP votes to the teams and talent they choose to play with. As one of the most dynamic big men in the sport, Davis could shock the basketball world by leading the Pelicans to a playoff berth while putting up career-highs across the board.

Coach of the Year: Brad Stevens

Last year, the Celtics finished atop the East for the first time in nine years and now Brad Stevens has two new All-Stars to help lead his team. Gordon Hayward helped Stevens lead Butler to a NCAA Championship game in 2010, while Kyrie Irving propelled LeBron and the Cavaliers to three consecutive NBA Finals appearances.

Stevens will not have any difficulty in getting this motivated group of guys to buy in, as the Celtics will rally around their new talent. Look for them to win around 58 games while finishing atop the conference.

Executive of the Year: Sam Presti

After losing Durant, the Thunder were supposed to finish near the bottom of the tough Western Conference. Instead, Westbrook led them to the playoffs and captured his first MVP award.

Presti rewarded his devoted point guard with a $205 million contract and a new pair of All-Star teammates. George and Anthony, like Westbrook, are high-volume scorers who won Olympic gold medals representing the USA.

If OKC’s offense meshes, George and Anthony will punish defenses by peppering them with drives and jump shots whenever defenders scramble to converge on the lightning-quick Westbrook.

On paper the Thunder feature one of best new starting lineups, but coach Billy Donovan is tasked with managing an array of eccentric individual personalities. He will need them all to work together to foster a healthy team culture, but at their best the Thunder could become viciously unforgiving on offense.

Excitement swirled around the debuts of Kyrie Irving, Gordon Hayward, Jayson Tatum and the new-look Boston Celtics on Monday as they defeated the Charlotte Hornets 94-82. Boston's starting lineup demonstrated terrific offensive potential, as Irving skillfully penetrated the lane, created scoring opportunities for teammates, and even threw down a dunk.

Aron Baynes drew the start alongside Al Horford in the frontcourt because of Marcus Morris’ ongoing legal case. The 6’10’’ Australian center made his presence felt with two offensive rebounds and a reliable midrange jumper that gradually drew Charlotte’s big men away from the paint. Baynes tallied 10 points and five boards in 18 minutes. He and Horford, two skilled shooting big men, opened up the floor for Irving and the other Celtics to operate near the hoop.


But while the basketball world was enamored with Boston’s new starting lineup, it was an unknown rookie off their bench that arguably had the biggest overall impact on the game.

Daniel Theis, the 25-year-old German forward who was quietly signed by the Celtics back in July, seized his first taste of NBA preseason action with terrific production, remarkable confidence, and fiery play. In 14 minutes, he quickly racked up 12 points, seven rebounds, three assists, one block, and one steal.

Playing alongside other international recruits and rookies, the 6'9'' Theis commanded a leadership role by frequently directing teammates and constantly staying active on offense to help space the floor while creating opportunities for offensive rebounds and second chance points.

Theis provided a glimpse of his potential, as well as a reminder that he led Brose Bamberg to three consecutive German League Championships over the last three years. He was named the league’s Best Defender last season and its Most Effective Player the year before that.

Unlike many European big men who struggle with the transition from international leagues, Theis appears both mentally and physically ready to embrace the challenges of a faster paced game with rugged battles in the paint against seasoned veterans.

Jonas Jerebko played a valuable role for the Celtics over the past three seasons with energy, physicality, dedication, and a high basketball IQ. Theis appears to bring all those things, but in a younger and more athletic body with an ability to either shoot from deep or slam down tip-in dunks and alley-oops.

Theis has seemingly modeled aspects of his game to those of another great German basketball player. Dirk Nowitzki once utilized his unique blend of height, sharpshooting, and physicality to help usher in a new era of the NBA.

While Theis may not score as prolifically as his future Hall of Fame counterpart, he will do his best impression while providing terrific energy and some unexpected leadership for the young Celtics bench.


Boston appears poised for a great season. The additions of Irving and Hayward alongside Horford in the starting lineup make the Celtics incredibly difficult to defend, especially when role players like Theis and Baynes are knocking down open shots.

The Celtics needed frontcourt reinforcements after losing Jerebko and Kelly Olynyk in the offseason. Theis will still need to build on this performance in order to earn consistent minutes, but so far it appears that he and Baynes are ready to step into critical roles as two of Boston's best new big men.
Posted by Jon Jacobson at 12:41 PM 15 comments: 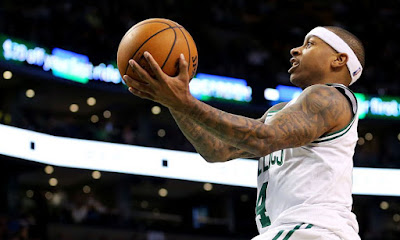 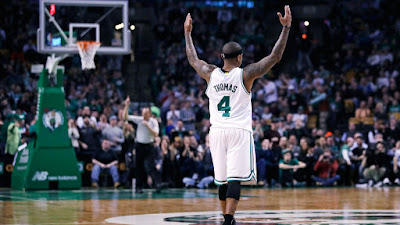