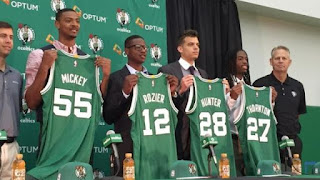 Following a promising 2014-2015 campaign, the Celtics entered the offseason with two glaring needs: a dominant rim protector who controls the paint and a consistent three point shooter who stretches out opposing defenses.  Consequently it was no surprise that a chorus of boos rang out from Celtics fans in the Barclays Center when Danny Ainge opted not to address either necessity with the 16th overall pick in the draft.

Instead of addressing specific needs, Ainge targeted rookies with great attitudes and a lot of upside in order to continue building on Boston’s intriguing foundation of scrappy, young, hardworking players.  ESPN’s Celtics reporter Chris Forsberg gave the Celtics a big “Thumbs Down” for their draft choices – but I strongly disagree.  Here’s why they deserve a “Thumbs Up.”

(16th Pick) Terry Rozier: B+
Initially this pick floored me because I was incredulous that Ainge would select anybody other than Sam Dekker.  Most draft experts projected Dekker to be a lottery pick so it seemed like a gift from God that the former Wisconsin star forward was still available at sixteen.  Ainge then promptly slapped God in the face by passing on Dekker and selecting a point guard that could have fallen out of the first round altogether.

But after the initial shock, and after Ainge selected a sharpshooting R.J. Hunter later in the first round, the idea of Terry Rozier running the offense for Boston’s second unit became increasingly intriguing.  The 21 year old Louisville product is an incredibly dynamic player and Ainge climbed up the draft board to select him early for a ton of good reasons.
First, Rozier plays like a pit bull, measuring in at approximately 6’2’’ and 190 pounds, most of which is muscle.  He plays with intensity, aggression, and confidence. Rozier will be able to make an immediate impact at the NBA level because of his athleticism, his raw strength, and his tenacious on-ball defensive skills.  These traits have actually caused Rozier to appear on the Celtics’ radar since his freshman year at Louisville and he has improved drastically over the past couple years. 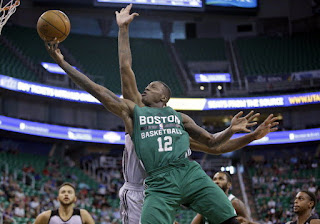 Rozier penetrates inside both by blowing past defenders and by outmuscling them through the lane.  Furthermore his ability to make accurate passes off the drive makes him very difficult to cover.  This past season, Rozier increased his average points per game from 7 as a freshman to 17 as a sophomore.  His average steals per game also doubled and he improved in essentially every statistical category except for three-point shooting.

His energy, quickness, and defensive intensity make him a great fit for Boston’s fast-paced style of play.  Right now he reminds me a little bit of Atlanta’s backup point guard Dennis Schröder, but in time, Rozier will grow and develop into a sort of Rajon Rondo/Marcus Smart hybrid who could find a home in almost any NBA starting lineup.

Much like Smart, Rozier combines physical strength with speed to become a relentless force in frazzling opposing ball handlers.  Summer League play provided a chance to watch Rozier and Smart play alongside each other for the first time and the two high-energy combo guards forced a ton of turnovers that led to fast break points.  With the addition of Rozier, this team could easily average over 15 fast break points per game this season.  (Last year they averaged 13.6)

Like Rondo, Rozier lacks height, but makes up for it with explosive quickness and a freakish 6’8’’ wingspan that helps him create chaos on defense.  He is also an extremely good rebounder for his height, pulling down nearly six rebounds per game last year.  Rozier is very comfortable inside the paint and has a graceful finishing touch at the rim. His jump shot is a bit inconsistent and needs some work, but fortunately it’s not broken like Rondo’s.  Rozier knocked down 33% of his three-point attempts and 77% of his free throws in college.

Bottom line, Rozier does not directly address any of the Celtics' most glaring needs, but he helps them significantly in several important categories as a catalyst and a playmaker.  Rozier will be able to create space for himself and others and generally make players around him better.  He will strongly contribute to Boston's high level of defensive pressure in the backcourt and absolutely will outmuscle and out-hustle opponents for loose balls.  Ainge knows the value of someone like that and jumped at the opportunity to acquire a hardworking young player who will likely make an immediate impact.  When asked if he will win the NBA Rookie of the Year award, Rozier responded “does an elevator go up and down?”  This kid will literally be a Tommy Point machine.

Despite Boston's crowded backcourt, Rozier will almost certainly carve out minutes for himself early in the season and will appear in three guard sets when the Celtics look to outrun opponents.  Rozier's new teammates are already very impressed with his work ethic and stellar play.  He is effective alongside other point guards and his own confidence is through the roof.  When asked on Twitter about the main goal for his career, he responded “GOAT.”

Greatest of all time is certainly setting the bar high, but according to Amir Johnson and several other teammates, Rozier stands out at Celtics’ practices.  His high energy and superb athleticism speak volumes about his potential.  His unwavering confidence and great work ethic demonstrate his desire to win.  Don’t be surprised if Rozier leads the Celtics in Tommy Points this season.  He’s doing things right and will soon win over Celtics fans, coaches, and management.  He
has already won over his teammates.

(28th Pick) R.J. Hunter: A+
The new best shooter in Boston has a very bright future for this franchise.

(33rd Pick) Jordan Mickey: A+
The Celtics have lacked a legitimate paint presence since 2011 when they traded away Kendrick Perkins to Oklahoma City.  It will be interesting to see if Mickey can grow into this critical role.  At 6’8’’, he is undersized for a big man, but makes up for it with terrific athleticism, high energy, and a 7’2’’ wingspan.  The former LSU power forward is a true student of the game who models his style of play after Dennis Rodman.  With a role model like that, it is no wonder that Mickey led the NCAA with 3.6 blocks per game last season.

Mickey blocked 219 shots in two seasons at LSU and last season he averaged a double-double with 15.4 points and 9.9 rebounds per game.  Like Rodman, Mickey is intensely focused on defense and rebounding.  He harasses opponents and loves getting under their skin.  But one of my favorite things about Mickey is that he frequently works with his stepfather, studying and watching film to identify potential areas of improvement in his own game.  Together they compare rebounding and defensive tendencies from Rodman and other NBA stars such as Dwight Howard in order to constantly find new ways to ensure that Mickey’s development never ceases.  This willingness to learn from others show a great deal of maturity for such a young player in the league.

This deep work ethic and defensive commitment make Mickey one of the most intriguing players in the draft class.  Like Rozier and Hunter, his ceiling is extremely high, which might explain why Ainge signed him to the biggest rookie contract in NBA history for a second round pick.  Mickey understands his role as a rebounder and shot blocker and those are two areas where the Celtics need immediate improvement. 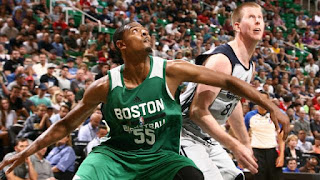 In the Summer League, Mickey showed off his athleticism and impressive leaping ability, averaging 2.4 blocks, 7.9 rebounds, and even scored 12.5 points per game.  He is quicker than he looks and his athleticism and awareness make him effective for pick and roll and fast break situations.  He finished some big alley-oop slams off lob passes from Rozier and Hunter and also demonstrated an ability to knock down open midrange jumpers from seemingly any angle.

Mickey is a fantastic pick because he cares deeply about both his own development and about playing in Boston.  He has very active hands on defense, always hustles, and thoroughly understands the game.  Probably the only other player I would have considered drafting with the 33rd pick is former Kentucky center Dakari Johnson for sheer size purposes alone.  However Johnson does not possess the athleticism or basketball IQ that Mickey does, and Johnson cannot run the floor effectively with the fast paced Boston offense.

In the opening weeks of the season, it may be difficult for Mickey to find consistent playing time in Boston’s crowded frontcourt, but he will ultimately get his chance – especially if the Celtics continue getting dominated inside the paint as they did last season.  If that happens, Mickey could well find himself patrolling the key for Stevens' small ball lineups sooner rather than later.

(45th Pick) Marcus Thornton: N/A
Not much to say here as Thornton will play in Australia this season.  Perhaps in a couple years, the sharpshooter will find his way back to Boston after working on his game overseas.
Posted by Jon Jacobson at 9:33 PM