All Around the NBA: First Edition

Taking a look around the league, there are interesting stories for NBA fans to look out for in the coming weeks.  Here is our first ever edition of All Around the NBA.  For starters, let’s talk about the reigning MVP. 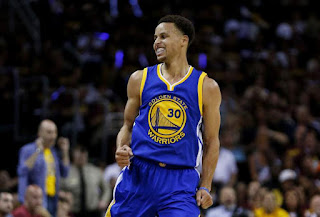 Steph Curry is even better than he was last season.  The 27 year old superstar’s early averages are absolutely insane.  Through five games, Curry leads the NBA with 35.8 points per game.  His .574 field goal percentage is best among all NBA guards.  He has also knocked down 28 of 54 three-point attempts for an NBA-high 52% from long range.

He leads the league with 50 transition points; Isaiah Thomas ranks second with 35.  He has an NBA-high player efficiency rating of 47.23; the best PER last season came from Anthony Davis at 30.89.

But you don’t need all these stats to recognize Curry’s greatness.  He is simply dominating the competition, blowing by defenders, and scoring at will.  He has made more three-pointers this season than five NBA teams.  Just look at his shot chart entering last night's game – is it possible for a reigning MVP to win the most improved player award? 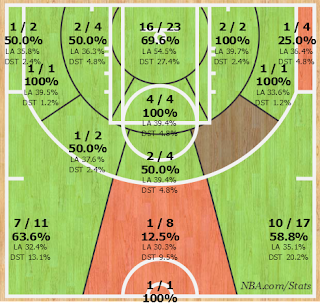 Curry’s stellar play has helped the Warriors jump out to an early 5-0 record, with all five wins coming against Western Conference playoff teams.  Against the Pelicans (twice), Rockets, and Grizzlies – all of whom were defeated by Golden State in the playoffs last year – the Warriors outscored their opponents by an average of 25 points.

Last night, they notched their fifth win after defeating the rival Clippers, who entered the game as the only other undefeated team in the West.  The Warriors and their MVP are scary good.  They are out to show the world that last year’s historic season was no fluke. 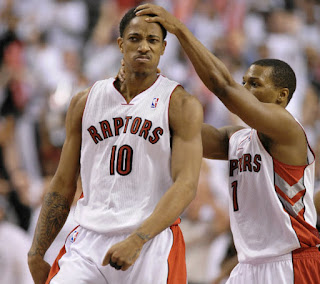 The Toronto Raptors have never been this good.  Their first 5-0 start in franchise history is not the only evidence.  The Eastern Conference's only unbeaten team lost Lou Williams in free agency, but quietly made up for it with a handful of underrated acquisitions in the offseason.

Journeyman DeMarre Carroll was a huge part of Atlanta’s unexpected success last season and his presence provides the Raptors with physicality and toughness on the defensive end.  New backup big man Bismack Biyombo does the same off the bench.  Former Spurs’ point guard Corey Joseph provides championship experience and a ton of confidence as the facilitator for Toronto’s second unit.  However the biggest strides have come from players they already had.

Kyle Lowry and DeMar DeRozan are playing the best basketball of their careers.  The two dynamic combo guards are each averaging approximately 20 points per game.  The Raptors were swept out of the first round of last year’s playoffs by Paul Pierce and the Washington Wizards and it is clear that the sweep did not sit well with Lowry and the Raptors during the offseason.  The Raptors are playing with a ton of intensity and they currently lead the conference with 106 points per game.  The loss of Williams, last year’s sixth man of the year, has not significantly hurt them because Terrence Ross has stepped into a volume scoring role off the bench. 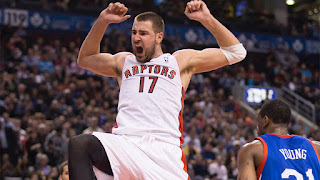 More importantly, starting center Jonas Valanciunas is a legitimate candidate for the NBA’s Most Improved Player award.  The fourth year big man out of Lithuania has anchored the Raptors frontcourt since he was a 20 year old rookie, but this year he looks like a completely different player.

The 23 year old noticeably put on a ton of muscle in the offseason and is impressively asserting his dominance in the paint.  The 7-footer has developed into one of the better big men in the league and his overall improvement has helped the Raptors hold their opponents to a conference-best 36.8 points per game in the paint.

With early career highs in points, rebounds, and steals, Valanciunas appears poised for a breakout season.  The Raptors are rarely mentioned in the same breath as the Cavs and Bulls, but there are a lot of reasons that Sports Illustrated magazine previewed them as the second best team in the East. 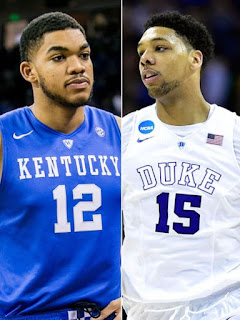 These rookie big men are the real deal.  The Warriors and Cavaliers may be the trendsetters as the NBA shifts its focus towards small ball, but don’t tell that to this year’s draft class.  Seven of the first twelve players selected in this year’s draft are big men, three of whom are already averaging double-digit scoring numbers as starters for their new teams.  Jahlil Okafor, the third overall pick in the draft, leads the way with 20.3 points per game.  This ties him with Andre Drummond as the NBA's highest scoring center.

Okafor is a fantastic basketball player and a mountain of a man.  The 270 pound teenager from Duke has better post moves than most seasoned vets.  As I mentioned when his 76ers faced the Celtics in their season opener, Okafor is essentially a young Al Jefferson with a 7’5’’ wingspan.  Most of his fellow rookies believe that Okafor will be the rookie of the year.  His remarkable play is helping to prevent the extinction of the classic bruising center amidst a generation of position-less “tweeners” and the implementation of free-flowing small ball.

As for the only rookie big man who got picked before Okafor, #1 overall pick Karl-Anthony Towns has helped the Minnesota Timberwolves win two of their first three games.  The 7-footer is averaging 17.7 points and 10.3 rebounds per game, making him the only rookie currently averaging a double-double.  Furthermore Towns is an effective defensive anchor who actively patrols the paint under the mentorship of Kevin Garnett.

Towns currently averages 2.67 blocks per game and will be battling Okafor for Rookie of the Year honors.  But unlike Okafor’s terrible 76ers, Towns and the Timberwolves could potentially find themselves fighting for a playoff spot.  The T-Wolves have a lot of young talent led by Towns, Andrew Wiggins and Ricky Rubio.  They have played fantastic thus far in a season dedicated to their late great coach Flip Saunders.

I highly recommend watching from the 4:45 mark in this emotional tribute video to Flip, which was played during Minnesota's home opener.  Afterward try to tell me that the Timberwolves aren't the most inspiring playoff bound team in the NBA this year. 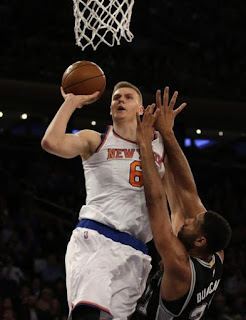 Other notable rookie bigs: The Knicks’ Kristaps Porzingis is averaging 12 points per game.  The 7’3’’ Latvian forward is quickly growing comfortable in the NBA and could develop into a longer more athletic version of Pau Gasol.  Porzingis is the first Knicks rookie since Patrick Ewing to record at least 40 points and 30 rebounds through his first four games.

In Sacramento, Willie Cauley-Stein is worth keeping an eye on.  He started the season on the bench but quickly got promoted to George Karl’s starting lineup thanks to his elite size, athleticism, and energy.  The 7-footer now starts alongside DeMarcus Cousins and comes up with at least one huge block every game.

Pacers’ rookie forward Myles Turner is contributing very effective bench minutes, as well as about eight points per game.  Turner has demonstrated that he can score effectively in spurts at the NBA level.  He also might see a big spike in playing time thanks to a back injury to starting center Ian Mahinmi. 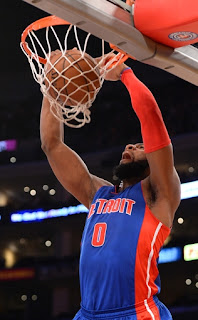 Break out alert: Andre Drummond.  In case you missed it, the Pistons center has 45 points and 49 rebounds over the past two games.  For a few seasons now, Drummond has been a double-double machine.  However he has never commanded the paint with the authority he has demonstrated this season.  This is largely thanks to the team’s offseason decision to not re-sign Greg Monroe.

The stretch four is a staple in Stan Van Gundy’s lineups.  He loves using sharp shooting forwards to spread the floor and unclog the paint as much as possible.  Monroe and Drummond are two talented centers who used to play effectively alongside each other, but switching out Monroe for Ersan Ilyasova has allowed Drummond to essentially become a one-man show inside the paint.  He has flourished in the role.

Reading ball trajectory like Kevin Love and athletically attacking boards like DeAndre Jordan, Drummond has been unstoppable this season.  He is essentially averaging 20-20 numbers while confidently assaulting the rim whenever he goes up for dunks and rebounds.  The athletic freak of nature has a 7’6’’ wingspan and is remarkably quick for a guy that is nearly 7-feet tall and lugging around 280 pounds of muscle.

Furthermore now that Monroe is gone, the paint is no longer constantly clogged with bodies.  This makes it infinitely easier for slashing guards like Reggie Jackson to penetrate inside.  It is no surprise that Jackson and fellow starting combo guard Kentavius Caldwell-Pope are both enjoying career highs in points.

Jackson and Caldwell-Pope now have significantly more space to drive the lane.  They are interchangeable as point guard and shooting guard, making them a very effective duo as they both know when to dish the ball out against a collapsing defense.  When they decide to go up strong and attempt to score, there is a good chance that Drummond will be right there to clean up any residual mess.  Van Gundy’s new offensive scheme may lead to a huge breakout season from Drummond and his Detroit Pistons are a surefire playoff team in the East. 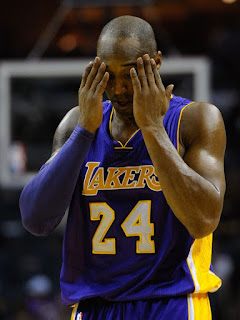 RIP Kobe Bryant.  The former global sports icon is averaging just 15.8 points in 28 minutes per game.  Last year, Bryant shot a career-low .373 from the field.  This year, that percentage has dropped to an abysmal .323.

"Depressed Kobe" is a player we have never seen before.  The Black Mamba is typically known for producing supreme confidence with every breath.  For years, Bryant dazzled in the face of adversity and never backed down from a fight.  He once had ice water in his veins and his confidence was unshakable; even during a rape trial.

So what is causing him to say such crazy things this season? Here are some highlights from his interview after a loss to the Mavericks:

Whether it is age or something else, Depressed Kobe is frustrated and humbled.  The former MVP who once hungered for championships is no longer the fierce competitor that struck fear into the hearts of opponents for the better part of two decades.  His Lakers are winless through four games - all of them against non-playoff teams.

The Lakers are a complete mess and Depressed Kobe recognizes it.  He even made uncharacteristic quotes about pulling back in the fourth quarter of close games to let the younger guys call the shots.  Are we really sure that this guy isn't just some imposter in a Bryant uniform? 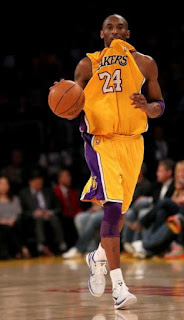 Just three years ago, Kobe confidently asserted that he will never become the old guy that hangs around and scores only 19 points per game.  But these days, 19 is pretty good for him.  Even as a Celtics fan – or especially as a Celtics fan, depending on how you look at it – the downfall of Kobe Bryant is incredibly uncomfortable to watch.

Kobe was supposed to be a scoring stud until the end; a competitive constant in the league.  He wasn’t supposed to go out like this.  But clearly Depressed Kobe has lost the edge and then some.

He still converts at least one or two incredibly contested shots per game, but his killer instinct on offense is gone.  Kobe’s [probable] farewell tour could end prematurely if Bryant is unable to stomach this nightmarish season.  When he was asked what he would say to Lakers fans in regards to the team's rocky start, Depressed Kobe consolingly advised,